October is National anti-bullying month and in her poignant post, my lovely friend, Author Trinka Hakes Noble shares about her real life story of being bullied in school and her Award Winning picture book, The Orange Shoes. Trinka is generously giving away a copy of the book to one lucky winner who leaves a comment. Maybe you have a story to share, too. We want to hear from you! 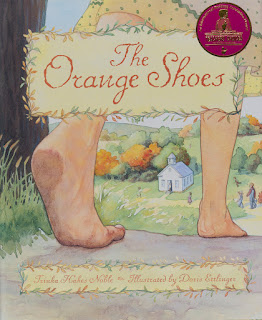 When a writer’s own childhood is woven into a story, there is a from-the-heart sharing that connects with something deep inside all of us. There is a sincerity, a vulnerability, an earnest innocence and the endearing, wide-eyed outlook of a child that is honored and treasured. Such a story is The Orange Shoes.

It is often said that authors will go back to their own childhood to right a wrong or to fix something that happened or didn’t happen or should have happened. What happened to Delly, the main character in The Orange Shoes, happened to me in real life when I was eight years old. It was a day I will never forget.

I grew up in a big family of seven kids, so getting a new pair of fancy shoes usually wasn’t an option. You either wore hand-me-downs, or got a very sturdy pair of brown tie shoes called Buster Browns. Those Buster Browns would last a kid through rain, sleet, mud and snow, but they weren’t very pretty. In fact, they were ugly, but that is what I wore. If you look in the corner of the illustration of Delly hugging her Dad, you can see them, patched with pieces of black inner tube. Back then, shoes were patched to last until the end of school, and then you went barefoot for the summer, which I did.

But one Saturday, when we went to town for out piano lessons, I saw a beautiful pair of orange Mary Janes in a shoe store window. Oh, how I wanted those beautiful orange shoes! But they probably cost too much money. 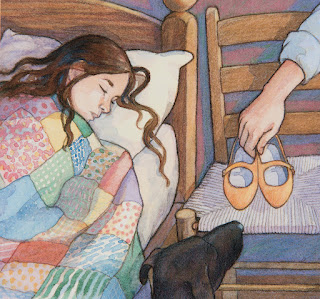 Lo and behold, the next morning, those orange shoes were setting right by my bed! I couldn’t believe it! On Monday morning, without asking my mom, I took those orange shoes to school and hid them under a bush on the edge of the playground. Then, at recess, I ran to that bush, took off my old Buster Browns and put on those bright orange shoes. I wanted to show them to the other girls who were playing by the swings. I thought my shoes would make them as happy as they made me, but I was wrong. Those girls didn’t even smile. Instead, those girls stomped on my shoes, kicked dirt on my shoes, and scraped and scuffed my shoes until they were ruined! 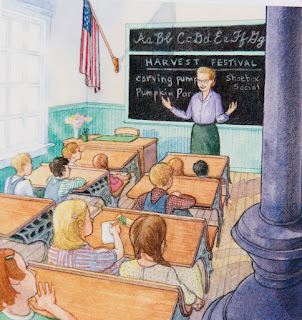 Now, here’s the thing. I didn’t do anything about it. I didn’t talk back, or fight back. I tried to run away, but they chased me all over the playground. I didn’t even tell my teacher, and I had a really nice teacher, just like Miss Violet in the book. This really bothered me my whole life, so when I became an author, I decided to write a book about that day, but I would let the girl in the book do what I wished I had done, but didn’t.

What Delly did was use her artistic talent to turn that wrong into the most glorious right. She painted pretty flowers, vines and leaves right over all those gouges, cracks, scuff marks and scrapes, and she created the most beautiful pair of orange shoe the world has ever seen! In the end, Delly triumphed by wearing those beautiful painted shoes to her school’s Harvest Festival Family Night. Delly and her orange shoes were the hit of the evening. 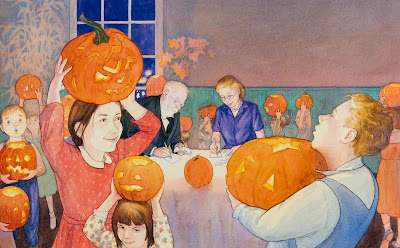 In The Orange Shoes, I meshed two writing genres, personal narrative and realistic fiction. I revisited my childhood to creative a story that righted a wrong, and changed what happened into what should have happened.

As one 3rd grader put it at a recent author’s visit, “Boy, you sure got even with those mean girls, didn’t you!”

Yes indeed, I did!  And it’s called The Power of the Pen.

The Orange Shoes is now in its 8th printing and is used in many schools across the nation to teach character building and to enhance the National Anti-Bullying Month of October.

The Orange Shoes won the International Reading Association’s prestigious Teacher’s Choice Award (2008) and received a Bronze Award from the National Parenting Publication (NAPPA).  It also received Best Books of the Year 2008 from The Children’s Book Council.

The Orange Shoes was nominated for the following: 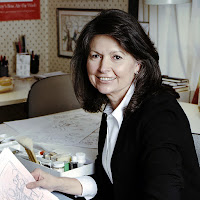 Trinka’s most recent title is Rettie and the Ragamuffin Parade - A Thanksgiving Story.  Forthcoming in the fall of 2019 is her newest book, A Fist for Joe Louis and Me, both published by Sleeping Bear Press.

Learn more about Trinka on her website at www.trinkahakesnoble.com

THANK YOU, TRINKA, for stopping by today to share your wonderful book and story with us! AND THANK YOU, DEAR FRIENDS, for taking time from your busy lives to leave a comment. Please spread the word on FB and Twitter for more chances to win Trinka’s beautiful book, THE ORANGE SHOES. I’ll be back next week to announce the winner.

~Clara
Posted by Clara Gillow Clark at 5:00 AM