Who is the Lucky Winner of MARBURY LENS?

Happy Book Birthday to The Marbury Lens. The book is officially released in bookstores today. Join the celebration here: http://www.ghostmedicine.com 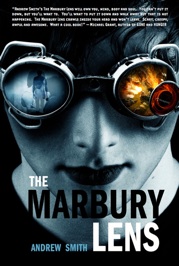 Before I announce the Lucky Winner of The Marbury Lens, you'll want to find out a little bit about what's coming. We're going from the realm of scary to the whimsical mind of a friend who will share an inside view of the writer's life and what it's like to complete a novel that's been in the works for years. Her words resonated deeply with me, and I wanted to share them with all of you writers, readers, teachers, librarians, friends. Keep an eye on your blog readers. She'll be here on November 16th.

So how do I pick a winner, exactly? I number all the comments with my own excluded, although I wouldn't mind winning every so often, and go to random.org, punch in the number range and see what number comes up. It takes the pressure off when you really really want everyone to win! The winning number was seven (7)!
That's **KEVIN**   Kevin, please e-mail me: claragillowclark (at) gmail (dot)com with your full name and address. The autographed ARC will be on its way shortly thereafter. As everyone knows, if I don't hear from Kevin within one week, a new winner will be picked.

Please take a moment to congratulate Andrew Smith and the book birthday of The Marbury Lens! Thank you!
Posted by Clara Gillow Clark at 5:14 AM No comments: