Our guest author, Trinka Hakes Noble, has written a very special story of gratitude and historical significance in an unusual Thanksgiving story set in 1918. Trinka’s text and David C. Gardner’s illustrations offer up a scrumptious feast for readers of all ages. You’ll want to own a copy of this poignant story for your family as a cherished read aloud during the Thanksgiving season.

Trinka is generously donating an autographed copy of, Rettie and the Ragamuffin Parade. All you have to do for a chance to win is leave a comment below. The winner will be announced in one week. 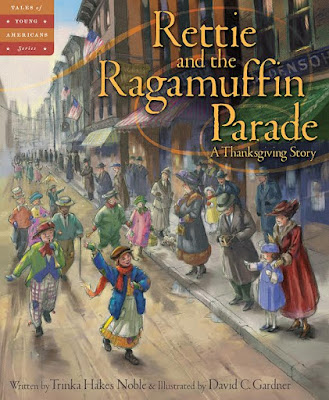 Sometimes a story gets started with just one word, and for Rettie and the Ragamuffin Parade that word was ragamuffin.

When I was growing up with my seven brothers and sisters, my mother endearingly called us little ragamuffins when we came inside from rambunctious play, with our hair a mess, our faces, hands and bare feet dirty and our clothes disheveled. I’ve always loved that word...ragamuffin.

So when I learned that there was something called the Ragamuffin Parade, which took place in New York City many years ago, I was captivated.  I learned that on Thanksgiving morning the children of New York City would dress up like beggars and hobos, smudge coal on their faces and parade down Broadway with their hand out asking, “Have ya’ anything for Thanksgiving?” People called them ragamuffins and would give them a penny. 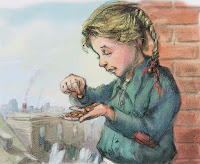 On busy street corners people would throw hands full of pennies in the air and the children would scramble for them. It was called a penny scramble and it could get rough. The immigrant children who lived in the tenements on the Lower East Side loved the Ragamuffin Parade because they could fill a pocket with much needed pennies.

But as years went by, Halloween became more popular in America. Children dressed up in costumes, marched in Halloween parades, and went trick-or-treating for candy. The Ragamuffin Parade fell out of favor.

Many of those immigrant children who fondly remembered the Ragamuffin Parade grew up to be employed by Macy’s department store in Midtown Manhattan. Some historians believe that these employees asked Mr. Macy if he would sponsor a parade for the children of New York City on Thanksgiving morning. And so, in 1924, the first Macy’s Thanksgiving Day Parade took place.

I just had to write a story using this information, and so I created a nine-year-old immigrant girl named Loretta Stanowski, whom everyone called Rettie, and placed her on New York’s Lower East Side, in a tenement apartment during World War I and the 1918 influenza pandemic that swept across America. In those trying times, Rettie managed to keep her younger siblings from going to an orphanage and take care of her sick mother while her father was away at the war. The only thing that kept her going was the hope that the Ragamuffin Parade wouldn’t be cancelled due to the influenza pandemic. But, triumph she did! On Thanksgiving morning Rettie proudly marched in the Ragamuffin Parade and got enough pennies to buy something special for their Thanksgiving dinner. In this uplifting Tales of Young Americans story, this young immigrant girl not only found her strength but also found the true spirit and meaning of an American Thanksgiving. 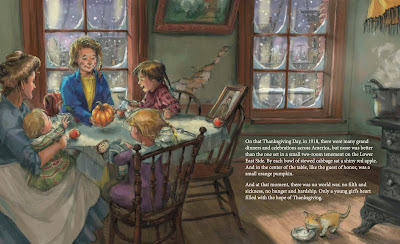 Other Tales of Young Americans books by Trinka are The Scarlet Stockings Spy - A Revolutionary War Tale and The Last Brother - A Civil War Tale. 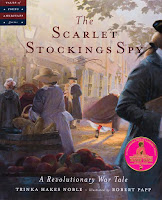 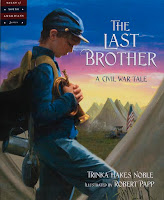 The series, Tales of Young Americans, is published by Sleeping Bear Press. Learn more at www.sleepingbearpress.com

Reviews of Rettie and the Ragamuffin Parade – A Thanksgiving Story 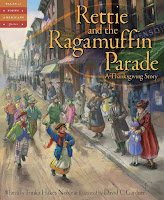 “Vivid art work and a descriptive narrative re-create a vibrant 1918 New York City populated by immigrants struggling to survive an influenza pandemic at the tail end of World War I.  VERDICT An excellent historical fiction picture book for the older reader interested in U.S. history or Thanksgiving celebrations, and this is a timely selection as this year marks the U.S.’s centennial commemoration of World War I.” – School Library Journal, September 2017

“It is slim pickings when it comes to Thanksgiving focused books. Those out there are more oft about turkeys, inaccurate pilgrim stories or pumpkins, but Trinka Hakes Noble has given us a real Thanksgiving story, with a focus on gratitude and connection to modern day traditions.” – Odds and Hens; Reach and Read, November 2017 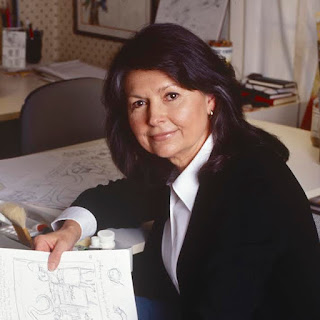 Ms. Noble graduated from Michigan State University with a BA in painting, and went on to study children’s book writing and illustration in New York City at Parson’s School of Design, the New School University , Caldecutt medalist Uri Schulivitz’s Greenwich Village Workshop, and most recently at New York University.

Ms. Noble is a board member of The New Jersey Center for the Book, The Rutgers University Council on Children’s Literature, The Author’s Guild and the Society of Children’s Book Writers & Illustrators.  In 2002, she was awarded Outstanding Woman in Arts and Letters from the state of New Jersey for her life-time work in children’s books along with letters of accommodation from The US House of Representatives, the US Senate and the US Congress.  She was also awarded Author of the Year, 2016/2017, by the New Jersey Association of School Librarians.  She lives in a circa 1780 house in historic Northern New Jersey.  Learn more at www.trinkahakesnoble.com

Thank you, dear readers, for spending time with us here. I am truly grateful for your encouragement and support of authors and good books! I’ll be back in one week to announce the winner of Rettie and the Ragamuffin Parade.   ~Clara

Posted by Clara Gillow Clark at 4:43 AM