UPDATES + WINNER of The Infamous Ratsos Are Not Afraid by Kara LaReau.

Our next featured author/illustrator is Trinka Hakes Noble coming later in November to celebrate a Book Birthday for her Thanksgiving themed picture book. I’ve been given a sneak peek and I know all you historical fiction and story lovers will be wowed by the richness of text and illustrations. But WAIT! Our good friend Gayle Krause is joining us next week with a Patriotic post for Veteran’s Day and a bonus craft for kids.

But it’s Halloween and I know you’re eager to learn WHO won last week’s comment contest for The Infamous Ratsos Are Not Afraid by Kara LaReau. The winner is announced in the middle of the post! 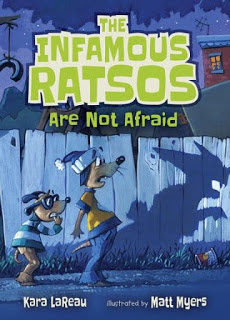 ★”Another tale for fledgling chapter-book readers that highlights the profound value of kindness to others.” (Booklist, starred review)

“Readers will be following right alongside these two likable rats as Ralphie confronts his past misdeeds and Louie screws his courage to the sticking post….Charming.” (Kirkus) 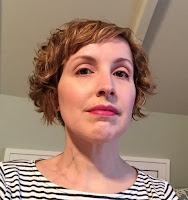 Kara LaReau was born and raised in Connecticut. She received her Masters in Fine Arts in Writing, Literature, and Publishing from Emerson College in Boston, Massachusetts and later worked as an editor at Candlewick Press and at Scholastic Press. Among other celebrated titles, she edited Kate DiCamillo’s Because of Winn-Dixie, The Tale of Despereaux, The Miraculous Journey of Edward Tulane,and the Mercy Watson series. She is the author of picture books such as UGLY FISH and OTTO: The Boy Who Loved Cars, illustrated by Scott Magoon, and NO SLURPING, NO BURPING! A Tale of Table Manners, illustrated by Lorelay Bové; a chapter book series called The Infamous Ratsos, illustrated by Matt Myers; and a middle-grade trilogy called The Unintentional Adventures of the Bland Sisters, illustrated by Jen Hill. Kara lives in Providence, Rhode Island with her husband and son and their cat.

The winner of The Infamous Ratsos Are Not Afraid is:  K.L.Going!

And be sure to check out this first book in the series!

Louie and Ralphie Ratso are no softies! Readers are sure to chuckle as the determined Ratso brothers’ plans to act tough go hilariously awry.
Louie and Ralphie Ratso’s dad, Big Lou, always says that there are two kinds of people: those who are tough and those who are soft. Louie and Ralphie are tough, tough, tough, just like Big Lou, and they’re going to prove it. But every time they try to show just how tough they are, the Ratso brothers end up accidentally doing good deeds instead. What’ll Big Lou do when he finds out they’ve been acting like softies all over the Big City? Perfect for emerging and reluctant readers, this clever and surprisingly warmhearted chapter book shows that being tough all the time can be really tough.

Thank you, dear book lovers, for your comments and encouragement for the featured authors and their stellar books! You’re the best. I’ll be back before you know it!


Posted by Clara Gillow Clark at 5:29 AM