So much was going on in the news this past week that I completely forgot about Newbery week. Then, just yesterday, I learned that our featured guest, Author Kara Lareau, had received great news about her previous book, The Infamous Ratsos. Her book was awarded a Theodore Geisel Honor. Congratulations, Kara! (See the book and learn more about it after her post about her NEW book, The Jolly Regina.)  Kara is donating an autographed copy of The Jolly Regina for the comment contest. So please leave a comment for Kara about her post or to congratulate her on her exciting award!

The winner of The Hollow Ground by Natalie Harnett will be revealed at the very end of the post.


Kara LaReau was born and raised in Connecticut. She received her Masters in Fine Arts in Writing, Literature, and Publishing from Emerson College in Boston, Massachusetts, and later worked as an editor at Candlewick Press and Scholastic Press. Currently, she lives in Providence, Rhode Island with her husband, their son, and their cat. You can learn more about Kara by visiting her website:  karalareau.com


The Unintentional Adventures of the Bland Sisters
by Kara Lareau

To be honest, I can be a little bit bland. I might not be as bland as Jaundice and Kale Bland, the protagonists of my new middle-grade trilogy, The Unintentional Adventures of the Bland Sisters. But I have had my moments. Here are just a few:

1.Sometimes, I make plans to go out and take a shower and get dressed and put on makeup, then decide I’d much rather stay home.
2. I mostly drink water, or plain seltzer.
3. I like plain pizza with no toppings (just sauce and cheese).
4. My wardrobe consists of five colors: blue, black, gray, green, and tan. (And I only wear solid colors, except for the occasional muted stripe.)
5. I prefer having very short fingernails with no nail polish on them.
6. I would rather sleep than do just about anything.
7. Sometimes I write something I really like, then put it away in a drawer. 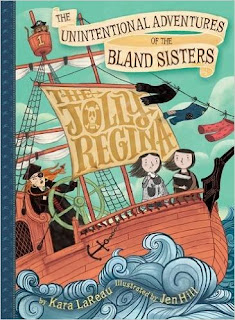 Some of these bland behaviors are harmless, or just a matter of (however-bland) taste, but that last one has been a problem for me. I kept the manuscript for THE INFAMOUS RATSOS (my new chapter book series) in a drawer for more than a year before I shared it with my agent. Why? Because I was afraid he wouldn’t like it, or wouldn’t know how to sell it, because it was different. If you think that’s bad, I hid away the manuscript for The Jolly Regina (the first book in the Bland Sisters trilogy) for waaaaay longer than that.

Jaundice and Kale might be inherently bland, but they’re also a bit too attached to what’s comfortable for them — their house, their cheese sandwiches, their dictionary — so it takes a real effort for them to get out into the world. (And in most cases, the effort is made by their parents!) Really, deep down, they’re just afraid. I relate to that a LOT — I spent my childhood (and much of my adulthood!) being afraid of many things, including (and especially) failure. That’s a tough one I still deal with now. And that’s why, for me, the challenge in being a writer isn’t in finding a good idea, or sitting down to write, or following through on a project. The hardest part is summoning the courage and the confidence to share my work with the world. 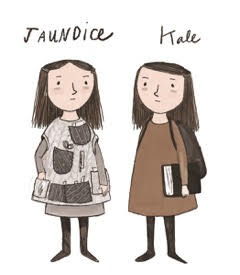 But over the past few years, I’ve had some experiences (a cancer diagnosis, having a baby) that have caused me to reexamine my life, and I’ve come to realize that everything good that has ever happened to me has happened because I stepped outside my comfort zone and took a risk. So, from here on in, I’ve been trying to be a little bit braver. I try to say YES more than I say no. So far, it’s working — THE INFAMOUS RATSOS and The Unintentional Adventures of the Bland Sisters are both on their way to becoming series, and I have more than a few other projects out on submission. I might still not like to wear nail polish or put toppings on my pizza, but if I’m going to go to the trouble of getting dressed up, or polishing up a new manuscript, you can bet neither of us is going to end up sitting around at home.

One can only hope Jaundice and Kale might learn that same lesson…eventually.

PRAISE FOR The Jolly Regina by Kara Lareau
“LaReau serves her humor dry, adding some serious swashbuckling for good measure… Meanwhile Hill’s pen-and-ink cartoons give the book precisely the right strange and silly tone.” (Kirkus)
“With dry humor and a touch of snark, this first book of a new series is a smart choice for readers who have mastered Bink and Gollie but aren’t quite ready for Lemony Snicket. (School Library Connection)
“Filled with puns, intrigue, and ample evidence that women make excellent—and ruthless—pirates, it’s a promising introduction to the Unintentional Adventures of the Bland Sisters series.” (Publishers Weekly)
“Replete with puns, gags, and life lessons, this transgressive voyage may “ketch” fans of envelope pushers like Barry Yourgrau, Alan Katz, or Roald Dahl.”(Booklist)
“Plenty of references to booty and poop decks make for easy humor, while more subtle comedy comes from the deadpan third-person narration.” (Bulletin of the Center for Children’s Books) 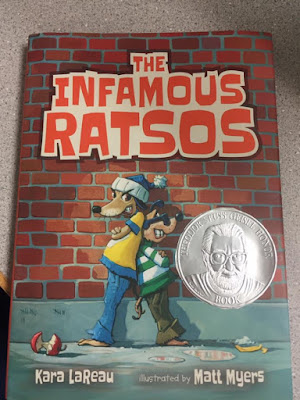 The winner of Natalie Harnett's debut novel, The Hollow Ground is: Annette Whipple. Congratulations to you, Annette. Please claim your prize by e-mailing me with your address and for whom you'd like it personalized: claragillow(at)gmail(dot)com.

Thank you so much, dear readers, for your continued support of authors and good books! I'll be back next Wednesday to announce the winner of The Jolly Regina. We're also having a Book Birthday and another giveaway!

Have a great week!
~Clara

Posted by Clara Gillow Clark at 5:26 AM