"Christmas Stories from the Heart" with Author Trinka Hakes Noble

Thank you so much for sharing what you were thankful for this Thanksgiving time. Your thankful hearts warmed my heart! I know you've been waiting for this announcement, so without further fanfare, the winner of Pat Brisson's book, Before We Eat: from farm to table chosen by random.org is:

Donna Volkenannt. ** Congratulations, Donna! **
(Donna, please e-mail me: claragillowclark(at)gmail(dot)com with your mailing address and how you'd like the book personalized.)

This week's featured guest, Author Trinka Hakes Noble, is generously donating one copy each of her two beautiful Christmas Books for the comment contest that she will autograph and personalize for the winners. All you have to do for a chance to win is leave a comment about the post or share a Christmas memory of your own. The winners will be announced on December 6th.

Christmas Stories from the Heart by Trinka Hakes Noble 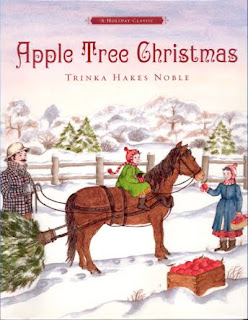 Every Holiday Season, bookstores cram their shelves and displays with Christmas, Hanukkah and Kwanzaa books for children. These books run the gamut from crassly commercial to deeply heart felt. Many holiday books are given to children as gifts each year, and many adults collect Christmas books. For many families, Christmas books are keepsakes they cherish year after year. So, children’s book publishers make sure they offer new holiday titles on their lists each year.

Having published two Christmas books and one Thanksgiving Day story, forthcoming in 2017, I feel writing these holiday books comes with a certain responsibility, not only to your young readers and the adults who purchase them as gifts, but to the holiday itself.

You can’t just hang a story, any old story, on a holiday like an ornament on a Christmas tree. To my way of thinking, the story must be interwoven in an organic way with the holiday, and yet, not totally dependent on it either. I feel that the story must be strong enough that it might be able to stand on its own without the holiday. At least almost. In other words, the story is so captivating and transporting that you might forget that you are reading a Christmas story.

And yet, the magic and wonder of Christmas must somehow be sprinkled into the story like soft snowflakes landing on your tongue.

I like to think that Apple Tree Christmas, which I wrote and Illustrated, is that kind of Christmas story. Not only is it written from my heart, but from my real life as well. I loved to draw as a kid, and one Christmas my father made me the most beautiful, real, professional drawing board I’d ever seen. Right then I knew nothing was going to stop me and I would grow up to be an artist.

But that Christmas long ago, there were two little words I never said. I never said “thank you” to my Dad for the best gift I’ve ever received.  So, when I did grow up to be an artist and a writer, I decided to say thank you to my Dad in a very special way. I wrote and illustrated Apple Tree Christmas just for him. If you read the dedication, you’ll understand.

Every illustration in Apple Tree Christmas I drew on that same drawing board my father made for me. It is sitting in my studio today. I probably wouldn’t be writing these words to you right now if my father hadn’t made me that beautiful drawing board so long ago.

Ever since its first publication in 1984, Apple Tree Christmas has touched thousands of readers young and old with its simple heartfelt message. Now in a handsome, classic edition, published by Sleeping Bear Press, Trinka Hakes Noble’s holiday remembrance reminds us once again of the strength of family ties and the boundless roots of love.

“So much of Apple Tree Christmas – the vine swing, the old apple tree, Mrs. Wooly, the drawing board, and the little girl who dreams of becoming an artist – is from my cherished Michigan childhood.” 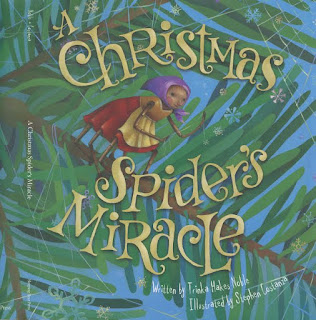 Christmas Spider’s Miracle was inspired by an old Ukrainian tale that touched my heart. My publisher at Sleeping Bear Press handed me a very short blurb describing this Old World tale and asked, “Are you interested?” Well, I was more than interested! My storyteller’s heart was captivated.

From this short blurb I wrote an original story of two mothers on a bitterly cold Christmas Eve. One was a poor peasant woman who struggled to provide for her children, and the other was a mother spider that also worked hard to care for her little spiderlings. Although different as night and day, these two poor mothers had much in common.

On Christmas Eve, that magical night of nights, they came together in a most heartwarming way with the kindness, compassion and grace that embodies the true spirit of Christmas.
The illustrator of A Christmas Spider’s Miracle, Stephen Costanza, captured the long ago Old World charm with his beautifully lush artwork.

Reviews for A Christmas Spider's Miracle:
“The story unfolds smoothly...with lyrical, dramatic text. An appealing story with a magical aura spun by the shimmering illustrations and memorable story.” – Kirkus Review, 2011

“Enchantingly told, the story is enriched by the visual magic of textured compositions.  An excellent choice for lap-sit reading or group sharing.” – School Library Journal, 2011


A new book coming in 2017, titled Rettie and the Ragamuffin Parade, is a Thanksgiving Day story about an immigrant girl who lives in the tenements on New York’s Lower East Side in 1918. Her name is Loretta, but everyone calls her Rettie. In 1918, American was in the grip of The Great Influenza Epidemic and World War I, colossal events way beyond a young girl’s control. In these hard times, Rettie struggles to keep her family together. The only thing that keeps her going is the hope that the Ragamuffin Parade won’t be canceled on Thanksgiving morning.

Long ago, the children of New York would dress up like hobos and beggars and parade though the streets of New York with their hands out asking “Have you anythin’ for Thanksgiving?” Then people would give them a penny. Rettie, along with all the tenement children, loved the Ragamuffin Parade because they badly needed those pennies.

History tells us that when Halloween became popular with children dressing up, parading and trick-or-treating for candy, the Ragamuffin Parade fell out of favor. Many of the immigrant children who loved the Ragamuffin Parade grew up to be employed at a large department store called Macy’s in Midtown Manhattan. Some historians believe that these employees asked Mr. Macy if he would put on a parade for the children of New York on Thanksgiving morning. And so, in 1924, the first Macy’s Thanksgiving Day Parade took place, and has continued to this day.

Rettie and the Ragamuffin Parade, coming in 2017, will be part of The Tales of Young Americans Series, published by Sleeping Bear Press. It is presently under illustration by David Gardner.

In closing, my wish this Holiday Season is that a Christmas story touches the hearts of the children in your life, and the child within you.

A Blessed Christmas to you all,
Trinka Hakes Noble 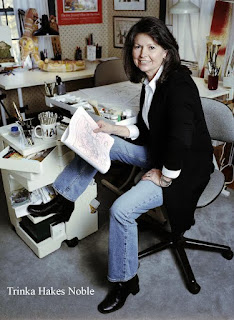 Trinka Hakes Noble is the award-winning author of over thirty picture books including: The Scarlet Stockings Spy (IRA Teachers’ Choice 2005), The Last Brother, The Legend of the Cape May Diamond, The Legend of the Jersey Devil and Apple Tree Christmas, which she wrote and illustrated. Other titles include: The Orange Shoes (IRA Teachers’ Choice 2008), The New Jersey Reader, Little New Jersey, The People of Twelve Thousand Winters and The Christmas Spider’s Miracle. Ms. Noble also wrote the ever-popular Jimmy’s Boa series, illustrated by Steven Kellogg, and Meanwhile Back at the Ranch, both featured on PBS’s Reading Rainbow. Her many awards include ALA Notable Children’s Book, Booklist Children’s Editors’ Choice, IRA-CBC Children’s Choice, Learning: The Year’s Ten Best, plus several state reading awards and Junior Literary Guild selections. Her latest titles are Lizzie and the Last Day of School (March 2015), and The Legend of Sea Glass (February 2016).
Coming in the fall of 2017 will be a story set on the Lower East Side in 1918, about a young immigrant girl named Loretta, whom everyone called Rettie. The title is Rettie and the Ragamuffin Parade: A Thanksgiving Story, and will be part of the Tales of Young Americans series by Sleeping Bear Press.

A graduate of Michigan State University, Ms. Noble went on to study children’s book writing and illustrating in New York City at Parsons School of Design, the New School University, Caldecott medalist Uri Shulevitz’s Greenwich Village Workshop, and at New York University. She is on the board of The New Jersey Center for the Book and a member of the Rutgers University Council on Children’s Literature. In 2002 she was awarded Outstanding Woman in Arts and Letters in the state of New Jersey for her lifetime work in children’s books, along with letters of commendation from the US Senate, the US House of Representatives and the US Congress. She is also the recipient of the Author and Illustrator of the Year Award, 2016, from the New Jersey Association of School Librarians. Ms. Noble currently lives in northern New Jersey. Learn more at her Web site www.trinkahakesnoble.com.

Thank you so much, Trinka, for sharing "Christmas Stories from the Heart" and your beautiful books, Apple Tree Christmas and A Christmas Spider's Miracle. I know we all hope you'll come back next year to share about your Thanksgiving book, Rettie and the Ragamuffin Parade.

On December 6th, my final guest for the year, Author Michaela MacColl, will share about the writing of Secrets in the Snow, a YA novel of intrigue and romance featuring Jane Austen!

Posted by Clara Gillow Clark at 5:17 AM