Writing from the Inside Out. . . Author Trinka Hakes Noble shares about Legends

Many years ago, Trinka Hakes Noble and I met at a conference--maybe it was The Hodge Podge Book Conference or it might have been Keystone Reading, but wherever or whenever we met doesn't matter. We were instantly friends. I'm so pleased to share with you my dear friend, Trinka Noble, who shares with you about turning legends into picture books for children. She's also generously giving away two of her picture books for the comment contest. See more about that and Trinka's amazing bio at the end of the post!

A Legend: Writing the Unwritten by Trinka Hakes Noble

When Sleeping Bear Press, renowned for publishing legends, asked me to write the legend of Michigan, I eagerly accepted. At the time, I was visiting their offices in Ann Arbor, Michigan; but once I was driving back home to New Jersey through the beautiful mountains of Pennsylvania, I was struck by this thought: How does one write something that was never intended to be written, ever, but only spoken? How does one write the unwritten?

A legend, passed down through eons of time, generation after generation, was told and retold. Furthermore, as far as I knew, there wasn’t a legend of Michigan! I was born and raised in Michigan. My family roots run deep, way back to when Michigan was a wilderness territory, and my Native American roots go back even further. So, why wasn’t I told this legend when I was a kid?

Needless to say, it was a long, fretful drive across I-80. And yet, by the time I reached the Delaware Water Gap, I was determined to find a way to write the unwritten!

I’d written numerous picture books, which often have a read-out-loud quality, so I knew how to start. But a legend seemed to need something more. I’d do historical research, of course, but a legend needed something beyond history, something venerable, something timeless, something for the ages. And so I turned to the masters. I read out loud, and at times actually recited, The Song of Hiawatha by Henry Wadsworth Longfellow and found what was needed--a cadence. Picture books have a rhythm, but a cadence is stronger and more pronounced, like the beat of a tribal drum. The strong beat of a tribal drum, which is believed to be the heartbeat of the earth, spoke to my Native American ancestry and to what I wanted to write for The Legend of Michigan. This was the breakthrough I needed to find a way to write what is traditionally spoken and not written. So I tuned my writing ear to the beat of a tribal drum, the heartbeat of the earth.

Interior Illustration from The Legend of Michigan 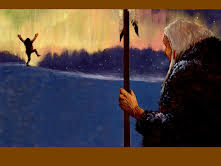 If I were going to use something as ancient as the beat of a drum, then I would have to go back to a time and space before the legend could appear. A legend often tells how and why something came to be. I would have to reach far back in time before the story of the legend started, and set the stage so the legend could happen. In The Legend of Michigan I journeyed back to the last Ice Age to find the story of how Michigan was created and came to be the unique shape of a mitten.

And even though I was writing a legend, I was also, and most definitely, writing a story. I wanted the feeling of sitting around a campfire on a still evening, watching the wood smoke drift up into the starry night, listening to elders tell this long ago story, their voices softly rising and falling through eons of time. So I put myself in both places. I had to become the storyteller, the elder and the young listener all at the same time in order for the written page to captivate and transport the young reader back in time. This was another breakthrough that I needed in order to write a legend.

And yet, I still had to somehow connect the legend to the present, to ‘now’ so young readers could relate, so it would have some meaning, some connection to the modern world of today.

Lastly, a legend needed a mythical element, something beyond logic and reason, something that could only happen in the realm of timelessness. Only then could a legend come to life on the written page.

Long long ago, the ancient peoples of the forest gathered around their warm bright fires and told the tale of a time long past, when the land of Michigane was covered with thick heavy ice. They called it the Long Night of the North Wind.

The Legend of Michigan -- Finalist for the Great Lakes Book Award, 2006

After writing The Legend of Michigan, illustrated by Gijsbert van Frankenhuyzen, I went on to write three more legends for Sleeping Bear Press.

The Legend of the Cape May Diamond, illustrated by E.B. Lewis, came next. It begins in a time long past, when the Delaware River was called the Wehittck and flowed through an ancient land called Lenapehoking, the ancestral homeland of the Lenape people.

Next came The Legend of the Jersey Devil, illustrated by Gerald Kelley.  It begins in a wild and mysterious place in New Jersey that has kept its ancient ways, called The Pine Barrens. Lurking in its black swamps and murky bogs are hidden secrets and evil stories that can only be told on the darkest of nights.


The fourth legend, and my latest book, is The Legend of Sea Glass, illustrated by Doris Ettlinger. It begins long ago when people believed the world was flat. No one dared sail beyond the horizon, for surely you would fall off the edge of the earth and be devoured by sea monsters. 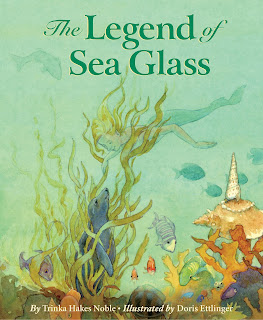 Summary: Long, long ago there was a time when mankind did not venture into the deep ocean waters. It was believed that the world was flat and to sail beyond the horizon meant falling off the edge of the earth. So even though they were drawn to and fascinated by the ocean, people feared it.

But as people lived their lives above the water, far beyond their view and in the ocean's deepest depths lived mysterious and magical sea creatures, half girl and half fish. These shy, gentle creatures were called mermaids and were much loved by the ocean. And when people finally overcame their fear and ventured out to sea, risking disaster and even death, it was the mermaids who came to their rescue. This imaginative legend explains the origin of sea glass, that treasured, collectible gift from the sea.

I learned a great deal from writing these four legends, and I believe they have helped me with my other writing as well. For me, this venture into an unfamiliar genre of writing the unwritten has helped me to stretch and grow as a writer and storyteller. Trinka Hakes Noble is the award-winning author of over thirty picture books including The Scarlet Stockings Spy (IRA Teachers’ Choice 2005), The Last Brother, The Legend of the Cape May Diamond, The Legend of Michigan and Apple Tree Christmas, which she wrote and illustrated. Other titles include The Orange Shoes (IRA Teachers’ Choice 2008), The Pennsylvania Reader, The New Jersey Reader, Little New Jersey, Little Pennsylvania and The People of Twelve Thousand Winters.   Ms. Noble also wrote the ever-popular Jimmy’s Boa series and Meanwhile Back at the Ranch, both featured on PBS’s Reading Rainbow. Her many awards include ALA Notable Children’s Book, Booklist Children’s Editors’ Choice, IRA-CBC Children’s Choice, Learning: The Year’s Ten Best, plus several state reading awards and Junior Literary Guild selections.

Her latest titles are The Legend of the Jersey Devil, and Lizzie and the Last Day of School (March 2015).  Forth coming in 2016 is The Legend of Sea Glass and in 2017 The Ragamuffin Parade, part of the Tales of Young Americans series by Sleeping Bear Press.

Ms. Noble has studied children’s book writing and illustrating in New York City at Parsons School of Design, the New School University, Caldecott medalist Uri Shulevitz’s Greenwich Village Workshop, and at New York University. She is on the board of The New Jersey Center for the Book and a member of the Rutgers University Council on Children’s Literature. In 2002 she was awarded Outstanding Woman in Arts and Letters in the state of New Jersey for her lifetime work in children’s books, along with letters of commendation from the US Senate, the US House of Representatives and the US Congress. Ms. Noble currently lives in northern New Jersey.

Trinka has generously donated a copy of her featured book, The Legend of Michigan, and her newest title just released on February 15th, The Legend of Sea Glass.

For a chance to win one of these two titles, simply leave a comment for us and your name will be entered. We appreciate your comments, dear readers! If you have a moment to spare, please tweet using the handy icon below the post. The winners, picked by random.org, will be announced in one week!

Thank you so much, Trinka, for sharing your writing from the inside out and for your generous spirit!


Posted by Clara Gillow Clark at 4:47 AM