Happy New Year to all of you and a Happy Book Birthday to my good friend, Laurie Calkhoven. I'm so pleased to share her newest title, released on January 1, 2020. The book is a perfect pick for readers aged 7-11 (Grades 2-5). If you have a favorite youngster in this age group or you're interested in writing transitional chapter books, be sure to leave a comment for a chance to win the autographed copy (generously donated by Laurie) of Roosevelt Banks, Good-Kid-in-Training. Of course, we'll be thrilled if you stop by to leave a comment for the Book Birthday celebration! Read on. . .


The Trouble with Being Good by Laurie Calkhoven

“It’s totally not fair that most of the fun things in the world are the very same things that will get a kid in trouble.” 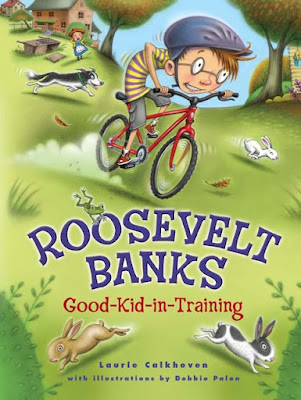 And there you have it – Roosevelt Banks predicament in Roosevelt Banks, Good-Kid-in-Training. Early in the novel, after burping during quiet reading time, pretending that he had split his pants during recess, and lurching around like a zombie in the school cafeteria, the fourth-grader learns that his two best friends are going on a bike and camping trip without him. It’s not that they want to leave him out, but Roosevelt doesn’t have a bike.

And that begins the campaign for a new bicycle. First Roosevelt has to bring his parents around to the idea. Then he has to achieve the unachievable—be good for two whole weeks to earn that new bike. That’s nearly impossible when another prankster is trying to weasel his way into Roosevelt’s spot on the trip.

Trying to show his friends that he’s still a fun guy while staying out of trouble leads to all kinds of misadventures – boogers on statues, barfing frogs, and even escaping rabbits. And along the way Roosevelt discovers that being a good friend is way more important than any bicycle. 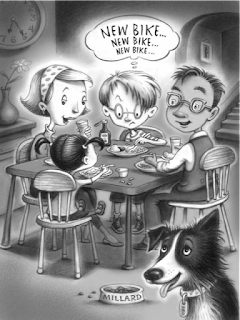 The idea for this story came to me during a school visit, when I was trying to explain to a group of young writers why conflict was so important in a story. It wasn’t long before a character named Roosevelt popped up in a morning meditation to say, “Hey, I want a bike!” He told me all about his presidential family (his parents are history professors, his sister is named Kennedy, and his dog answers to Millard Filmore), and why that bike was so important.

Illustrator Debbie Palen brought a lot of joy and humor to the text. And funny—Roosevelt looks almost exactly the way I pictured him.

Laurie Calkhoven has never swallowed a frog, knocked over a rabbit hutch, or sung too loud in music class, but she is the author of more than 50 books for young readers. Recent titles include the G.I. Dog series, and You Should Meet Ruth Bader Ginsburg.

To book a school visit or to learn more about Laurie, her books, and her workshops for writers visit her website:  www.lauriecalkhoven.com 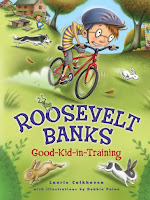 
I'll be back in a week to announce the winner of ROOSEVELT BANKS, GOOD-KID-IN-TRAINING.

Thanks so much for supporting authors and good books!

Posted by Clara Gillow Clark at 5:50 AM