Summer has been especially busy this year, but a Picture Book Birthday for a friend who lights up a room with her smile could not be passed up! And now, presenting the one, the only, Tracey Kyle and her new picture book, FOOD FIGHT FIESTA! I just know you’ll love the vivid colors of the unusual La Tomatina Festival. (learn more about it in Tracey’s post.) You may even decide to have one of your own. La Tomatina is perfect for tomato season, si? AND Tracey is generously donating an autographed copy of FOOD FIGHT FIESTA! to one lucky winner who leaves a comment about the post. More details about that at the end.

Here’s a little bit about Tracey: 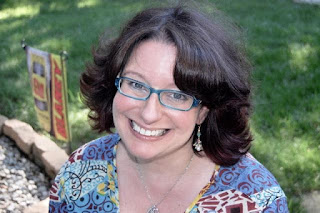 Tracey Kyle published her first bilingual picture book, GAZPACHO FOR NACHO (Two Lions) in 2014. She is also the author of A PAINTBRUSH FOR PACO (little bee) and the forthcoming ALPACA PATI (Running Press, 2019) and PEPE’S SPECIAL DAY. OLE! (little bee, 2019). She spends most of her day as “Señora Kyle,” teaching Spanish to an energetic group of 8th graders, and when she’s not writing she likes to cook, read and practice yoga.


Be sure to stop by Tracey’s website to learn more about her wonderful books: http://www.traceykyle.com


Writing from the Inside Out by Tracey Kyle


If you’ve ever wanted to have a food fight, then book a flight to Valencia, Spain right now.  On August 29th, in the tiny town of Buñol, about 20,000 people will show up to throw tomatoes for a few hours.

The last Wednesday in August each year is the celebration of LA TOMATINA, the world’s largest food fight. Tons of tomatoes are grown just for this festival, which has grown in size so much that you now need to buy a ticket to participate. It’s quite the fiesta: after the food fight (la guerra de comida…doesn’t that sound so much better in Spanish?) there’s a paella cooking contest, music, parades and fireworks.

I’ve lived in Spain twice, but I’ve never been to LA TOMATINA. I did, however, learn about it when I was teaching AP Spanish.  Other than the article in the textbook or some online sites, there was nothing about this unusual festival.
At the time, my first book was about to be published, but I didn’t have an agent and I was so busy teaching that the idea of a Tomatina picture book  marinated for a while. I kept hearing that editors wanted “character-driven stories” and I knew this story, if I ever wrote it, would be a concept picture book.

I began to study concept picture books, sitting in Barnes and Noble reading on the floor of the kid section. This helped me with structure. On Monday mornings I would return to my crazy, stressful, busy job as a teacher and forget about the book. I love teaching, but the intensity of the day does not afford me the time to get lost in creative thought.

It was at a weekend writer’s retreat nearly a year and a half later that the TOMATINA story finally blossomed. Our mentor, Candice Ransom, showed us how cutting out pictures and words from magazines could spark ideas. For hours, I pasted scenes in a notebook. When the session was over, I realized I had a lot of tomatoes! I wrote the first lines I thought of in that notebook: “Whoosh! Tomatoes are filling the air / SPLAT! Tomatoes are stuck to my hair.” Once I had the voice and the narrator’s point of view, I wrote the first draft in a few hours. I let it sit for a month, came back to it for revisions, and then worked on a different story. I wasn’t sure it would get published, but that goes through my head with everything I write.

I also needed an agent, and I’d spent two years submitting work to people without any luck. Then, at an SCBWI conference, I bumped into the Jennifer Unter of The Unter Agency. I say “bumped into” because Jen and I had attended the same high school and ironically we were in Spanish class together, but that’s another blog post! I knew she was going to be there and I only wanted to say hi and find out how she was doing after all these years.  But in the course of our conversation, she told me to send her some stories. About eight months later, she’d sold three books of mine. FOOD FIGHT FIESTA was one of them.

This book was a happy journey for me. It was one of the first manuscripts Jennifer sold, and we have a very comfortable relationship. I tell everyone it was fate to run into her thirty years after graduating! Also, I had the opportunity to work with a wonderful editor at Sky Pony named Allison Weiss. She was not the editor who originally bought the story, but she championed it from the minute she took over and was so enthusiastic. (I secretly think Allison would love a good food fight!) Lastly, I knew the minute I saw Ana Gomez’s illustrations that her style was perfect: whimsical, engaging, energetic and authentic.
This experience also showed me that sometimes an idea needs time to grow. I’m not a patient person, and as a teacher I’m used to doing everything immediately! because there’s so little time to think. As an author, however, I’ve had to slow down. I still keep an idea notebook and cut out pictures. When a rhyme or a phrase pops into my head, I make a note of it. And eventually…SPLAT! Like a crushed tomato landing at your feet, the idea bursts open and becomes a story.

Now, go buy your ticket to Valencia. LA TOMATINA is only a few weeks away! 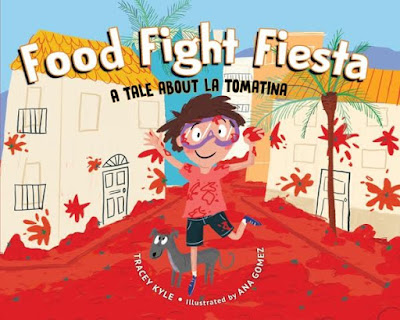 KIRKUS REVIEW: An American child travels to Buñol, Spain, to take part in the town’s annual raucous celebration of the tomato. La Tomatina is a large organized food fight in which residents wear goggles and spend the day throwing crushed ripe tomatoes until the streets are covered in one ruby red, pulpy mess. In an easy flowing rhyme, the narrator describes their enthusiastic participation. “ ‘Tomate, tomate,’ we hear the crowd sing. // We’re ready to squash the tomatoes and fling! / The truck moves in closer. ¡Ole?! Here we go! / Grab a tomato. Get ready…now THROW!” Cartoon illustrations depict the rowdy, frenzied event as everyone and everything is splattered and splashed in the fruit’s squishy juices. And when the loud “BOOM!” of the cannon signals the end of the fun, everyone cleans up, happy to have enjoyed another festival of the tomato. Adults and children alike may notice that despite the glee with which the text describes the mess, characters’ clothes are remarkably unstained by the end. The narrator presents white, as does much of the crowd, though it is definitely a multiethnic affair. An author’s note explains the increasingly popular event, where tourists and locals alike enjoy parades, music, fireworks, and paella, the saffron-based dish of rice and seafood. A high-spirited celebration of a unique experience. (Picture book. 5-8)

The winner of FOOD FIGHT FIESTA will be announced in one week. As always, thank you so much, dear readers, for stopping by to leave a comment for Tracey. We truly appreciate your support of authors and good books! Spread the word for more chances to win. Winner chosen by random.org. Leave a comment and don’t forget to visit Tracey here: http://www.traceykyle.com

Posted by Clara Gillow Clark at 5:06 AM