Summer seems to be flying away with the songbirds, and that means it’s time to get ready for school. And back-to-school time is especially exciting here for learning about new books for your favorite young readers. You’ll also get introduced to new authors and hear from some long time friends who’ve visited before. First up on our Back to School Celebration of Books is a special treat of a sister writing duo--just how do siblings manage to write together? Heidi and Kati will have their say, and then at the very end of the blog you’ll find out how to enter the giveaway for their debut novel, but also learn what’s percolating for future posts. But now, please welcome the sweet sister duo, Heidi Lang and Kati Bartowski!

Here’s a look at their debut novel just released in mid-July: A Dash Of Dragon

The plot rockets along, the third-person narration peppered by agreeably colloquial dialogue. Mix a dash of humor with some action and adventure, throw in a couple of cute boys plus a gutsy heroine—this novel is a recipe for success—perfect for Top Chef fans with a penchant for the fantastical. Kirkus Reviews

This middle grade fantasy introduces an exciting world where engaging human and magical characters live together. The title tackles themes of abandonment, loneliness, risk-taking, trust, and friendship. Readers are likely to become wrapped up in Lailu’s story and anxious to know what her fate will be. School Library Journal

Cooking fans prepared for a different slant on magical creatures will find this a particularly entertaining outing, as there are lots of foodie references, but even fantasy buffs who have never heard of loin cuts or hot pots will likely find this a zingy, buoyant adventure where the happy ending is certain but the path to it is enjoyably twisty. The Bulletin of the Center for Children’s Books


HEIDI: Heidi here, co-author of A DASH OF DRAGON. I’m a dog walker in Santa Cruz, so when I’m not writing I spend my days out on the trails with roving packs of dogs, and then all my spare time trying to get dog fur out of my clothes.

KATI: I’m Heidi’s sister, also co-author of A DASH OF DRAGON, and instead of dog packs, I spend most of my time wrangling a high energy toddler. When she sleeps, I manage to get in some writing or drawing.

HEIDI: When I tell people my sister and I wrote a book together, most people have one very big question: How did you co-write with your sister and not end up killing each other?

KATI: You know, I often wonder that same thing…

KATI: Anyways…Heidi and I thought we’d share with you all our co-writing process. We didn’t initially set out to write a book together, so we cobbled together our method as we went along.

HEIDI: Originally Kati was planning on writing two separate books: one about a girl who hunts and cooks mystical beasts, and the other about a fantasy world slowly being taken over by science, with the elven mafia fighting to keep control as a group of steampunk scientists gain more power and influence. I loved both of those ideas, but thought they would work best combined in the same book. Once I suggested that, Kati realized my brilliance and begged me to write it with her.

KATI: So, what actually happened is Heidi kept coming up with ideas and suggestions, and I could tell she was super excited about it, so finally I was like, “you know, maybe we should just write it together.”

HEIDI: And I jumped at that suggestion like a wild hyena.

HEIDI: Thank you! ;) Kati and I had done quite a bit of writing on our own before this, and we always tossed story ideas at each other, so it was probably inevitable that we’d write something together eventually. And honestly, I really was super excited about this story. I still am, in fact. We are finishing up revisions on the sequel, and let me tell you, it gets even more epic.

KATI: No spoilers! Moving on to the mechanics of how we actually co-write, Heidi and I have very different writing styles. I like to plot out everything—

HEIDI: She really does. Every little thing.

KATI: Whereas Heidi is a complete pantster, or someone who writes by the seat of her pants. Meaning I’ll spend all this time creating a detailed outline, just so Heidi can go in and ignore it.

HEIDI: I don’t ignore it. I simply…take it under advisement. ;) But the overall story arc is one that both Kati and I agreed on before we started, and even while we were working, we spent a lot of time talking about the characters and the story to make sure we were both moving in the same direction.

KATI: We would each take turns writing sections. I’d write something and then send it over to Heidi, who was free to revise my section before writing hers and passing it over to me, and repeat. We purposely didn’t set any strict page or chapter amounts on each section - we would each just write as much as we felt like writing before sending it on.

HEIDI: It worked out nicely that way. There wasn’t pressure to force a certain amount, and it gave me the opportunity to do things like oh, say, invent a new character and end my section with his sudden arrival, and then sit back and see what Kati would do with it.

KATI: True story. She invented a character who terrified all the other characters in the story, but didn’t tell me anything at all about who he was or why they were scared of him. Not cool. :(

HEIDI: Heh heh, probably my proudest moment. :) Earned me an angry phone call, and was the one time Kati forced me to add more to my section…but it was totally worth it. Also that character morphed into an integral part of our story, so yay for pantsing!

KATI: Anyhow. By the time we were done with a complete draft, we’d both revised each other’s sections enough that all our writing was mixed in together, which made it feel more like one voice. It also made it easier to cut and change things in the next round of revisions, because everything was a mix.

HEIDI: To get back to the first question, how we were able to write together without killing each other, I’d say the fact that we are sisters really helped. We could both be completely honest with each other about things we felt were working or weren’t, and even though there were some heated…discussions, ultimately we’ve been sisters a long time, and we both knew we didn’t have to worry about any disagreements ending our friendship. Sisters to the end!

KATI: Whose end is the question… ;)

HEIDI: Haha. Okay. Well. I’m going to slowly back away now…it’s been lovely chatting with all of you! 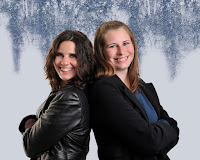 KATI: A DASH OF DRAGON is our debut MG fantasy, and we hope you have as much fun reading it as we had writing it! And if you want to follow us, you can find us on twitter at @hidlang and @ktbartkowski. We’ll be doing a special sisters-themed giveaway soon! Our website is www.HeidiandKatiwrite.com.

Thank you, Kati and Heidi for sharing about your experience of sisters co-authoring a book! And thanks so much for donating an autographed copy of A Dash of Dragon for the comment contest.

Readers, all you have to do for a chance to win A Dash of Dragon is leave a fun comment for the dynamic sister duo. If you’re new to the blog, please include your email in your comment. The winner will be selected through random.org and announced on Wednesday, August 23rd. Next up is a new post featuring a favorite dynamic duo--Joe and Sparky, Party Animals by our  good friend, Jamie Michalak. Coming soon is historical fiction with Kathy Cannon Wiechman.

Thank you, dear readers, for supporting authors and good books! We appreciate your comments. You’re the best ~Clara

Posted by Clara Gillow Clark at 5:38 AM