It's a Book Birthday Party with Linda Oatman High + Giveaway

Our guest today, author Linda Oatman High, shares an inside look about the story behind her NEW book from HarperCollins, ONE AMAZING ELEPHANT, released on February 14th! And, YES, Linda is generously donating a copy of One Amazing Elephant to a lucky reader who leaves a comment for her! Please help spread the word by sharing on twitter and you'll get two chances to win her book. Winner picked by Random.org. (The winner of last week's giveaway of Twice Betrayed is announced at the end of the post.)

Writing from the Inside Out. . .  by Linda Oatman High 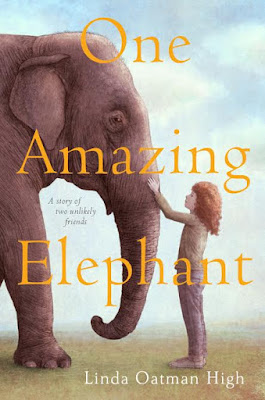 I wanted to write about an animal that had come from a sad place, a time of neglect or abuse, but then found a good home. I chose an elephant, one of my favorite creatures on earth.
The first thing I heard while thinking about this book was the voice of the elephant, echoing in my head. “Bill The Giant has died and I cry,” the sorrowful voice said. “Elephants do cry.”
I named this elephant Queenie Grace. I wanted her to be a stately and elegant elephant, royal, majestic as a queen. I gave her Grace, because I knew that she’d have much to forgive. She had to be full of dignity, able to pardon past mistreatment. Queenie Grace had to be compassionate and kind, not bitter, and she needed to be an elephant that readers could adore. I loved her from her first words.
I decided to go with alternating chapters of the elephant’s first-person voice. I wanted not only to get inside Queenie Grace’s head, but within her soul. I hope that readers get to know Queenie Grace, too.
Scientists know that many animals grieve much as humans do. By helping children to understand this, I believe that we assist in developing empathy for all creatures great and small, human and otherwise.

Plot Summary From HarperCollins:
A poignant middle grade animal story from talented author Linda Oatman High that will appeal to fans of Katherine Applegate’s The One and Only Ivan. In this heartwarming novel, a girl and an elephant face the same devastating loss—and slowly realize that they share the same powerful love.
Twelve-year-old Lily Pruitt loves her grandparents, but she doesn’t love the circus—and the circus is their life. She’s perfectly happy to stay with her father, away from her neglectful mother and her grandfather’s beloved elephant, Queenie Grace.
Then Grandpa Bill dies, and both Lily and Queenie Grace are devastated. When Lily travels to Florida for the funeral, she keeps her distance from the elephant. But the two are mourning the same man—and form a bond born of loss. And when Queenie Grace faces danger, Lily must come up with a plan to help save her friend.

Review from Publishers Weekly:
High’s (Planet Pregnancy) well-balanced novel about love, forgiveness, and the tightrope walk of friendship and family is centered in Gibsonton, Fla., “the strangest town in the nation.” Unlike the flamboyant circus side of 12-year-old Lily Rose Pruitt’s family—including her dear Grandpa Bill, dubbed “the Giant” at more than seven feet tall, and her estranged mother, Trullia, a trapeze artist—cautious Lily bottles up her emotions and avoids risks: “Keep it inside. That’s my motto.” Lily lives with her father in West Virginia, but when her grandfather dies unexpectedly, she flies to Florida alone for the funeral. There, she confronts her fear of the Amazing Queenie Grace (her grandfather’s elephant), forms friendships and makes a few enemies, tries to protect Queenie Grace from harm, and eventually comes to terms with her mother. The chapters alternate gracefully between Lily’s and Queenie Grace’s perspectives, and High effectively sketches how Lily gradually champions the elephant and recognizes larger issues around the ways performers abuse circus animals. Ages 8–12. Agent: Rosemary Stimola, Stimola Literary Studio. (Feb.) 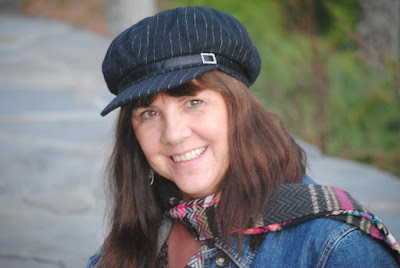 Linda Oatman High is an author/journalist/playwright/poet who lives in Lancaster County, PA. She holds an MFA in Writing for Children and Young Adults from Vermont College, and teaches at schools and writing workshops both nationally and internationally.

Learn more about Linda and her many books: www.lindaoatmanhigh.com

THE LUCKY WINNER of TWICE BETRAYED by Gayle C. Krause IS:

Thank you, dear readers, for supporting authors and good books! You're the best!

I'll be back on Valentine's Day to announce the winner of One Amazing Elephant.


Posted by Clara Gillow Clark at 5:41 AM