Writing from the Inside Out. . . Interview with Author/Illustrator Ken Lamug + Spooky Halloween giveaway

There's a deliciously spooky Halloween treat waiting for you, but first the winner of last week's giveaway for The Stone and the Bowl by Bish Denham is: Rosemary Basham!! Congratulations, Rosemary! Last week's winner didn't claim her prize, so I pulled a new winner for Pamela Jane's Halloween or Christmas book using random.org. Congratulations to: Heather Sebastian! Thank you for including your e-mail address. I'll be in touch shortly.

NOW. . .Please join me in welcoming the mutli-talented, Author/Illustrator Ken Lamug. Learn about Ken, read his insightful interview about his writing journey and influences, and click on his links for a real spooky preview of his picture book and for lessons in illustration! Thank you, Ken, for your generosity in donating an autographed copy of your book, The Stumps of Flattop Hill. Ken hinted that he might have some extra treats for the winner! So please be sure to leave a comment for Ken for a chance to win! 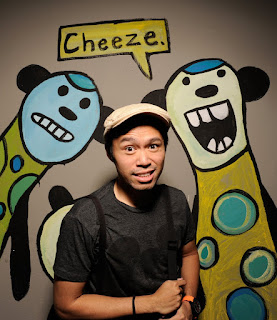 Kenneth Kit Lamug is an author/illustrator based in Las Vegas, Nevada. He self-published his first children’s book which won a bunch of awards and fulfilled one of his lifelong dream. His most recent books include the macabre children’s fairytale, The Stumps of Flattop Hill (One Peace Books) and the parenting parody book, HURTS LIKE A MOTHER (Doubleday). He has contributed to Joseph Gordon-Levitt’s “Tiny Books of Tiny Stories” and many other publications. Ken has also worked in movies, comics and his photography has been showcased internationally. When he’s not making monsters in the basement, he enjoys other hobbies like working. 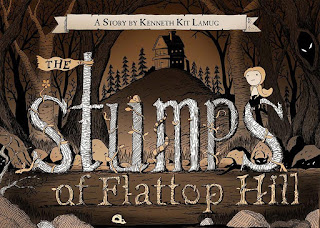 The Stumps of Flattop Hill is a macabre tale of a little girl who enters the town’s legendary haunted house in the face of fear. A dark tale for children in the tradition of the Brother’s Grimm, it calls to mind the provocative illustration style of Edward Gorey. Scary and entertaining, this book challenges the idea of what children’s books can be.

How did you come up with the storyline?


The Stumps of Flattop Hill was a small idea that started with a rhyme. I didn’t really have a firm idea, so I stowed it away. Then one day, while on a family vacation, we drove past a town called Flat Top (California) and for some reason that name sparked the idea for the story. I was rhyming and thinking of the possibilities all the way to San Francisco.


When I returned, I started writing down the idea and was even inspired by Edgar Allan Poe’s The Raven. The haunted house idea came from my childhood experience, where kids daring each other to enter a creepy house was not an unusual event.


I got to work and it all came together a few months later.


I grew up in the Philippines which was a melting-pot for many cultures (from Spanish, Chinese, Japanese, Middle-Eastern, Western and others). Hearing stories about urban legends, & folktales was just part of growing up.


Grimm fairy tale stories that I read as a child were already westernized versions which were kid-friendly. I enjoyed reading them and watching them on television. The fantastical worlds and mysterious creatures fascinated me.


What really scared me though were the stories that kids would share around the neighborhood. We had monsters that stole babies from pregnant women, dark elves that would cast illness, or ghost that haunted our school hallways.


Those were real to me and has influenced my stories in many ways.


What was your artistic influence for The Stumps of Flattop Hill?


When I first saw some of Gorey’s books I was mesmerized by his technical precision. The detailed line work required a lot of discipline and patience, which was something I lacked at the time. But as I studied more of his books, I also fell in love with his dark humor. I felt that his stories were never straightforward, that something was hidden for the reader to interpret. His work ethic is also a great inspiration, producing over a hundred books is quite an accomplishment. A few of my favorites include, The Epipleptic Bicycle, The Willowdale Handcar and his most popular book The Gashlycrumb Tinies. These books are perfect examples containing the right amount of humor, macabre and mystery.


Another influence that I should mention is Tim Burton. His short film, Vincent, created quite an impression, along with his loose and dynamic drawing style. I was hoping to achieve that balance between Gorey and Burton in The Stumps of Flattop Hill.


How long does it take you to draw an image? How long to finish the book?


I found that planning a scene will often times take longer than the drawing process itself. Since I also have a regular job and a family, I can only dedicate so many hours in a day to drawing or writing. A typical drawing can sometimes be completed in a single evening or sometimes it can take more than a week. But planning it and thinking about the right image can take a long time and many trial and errors. The entire book took about six months to complete and a few revisions that occurred over a year's time. It’s always healthy to step back from a project and look at it at a later date with a fresh perspective.


What about the parents who do not want their kids to read spooky stories?


I can understand how some parents wouldn’t want their kids to read a spooky story. Maybe they don’t think their kids can handle it, but I also think we don’t give the kids enough credit in this regard. Of course, as parents we have to gauge what our kids can and cannot handle. But we should also take this opportunity to explain things and teach them.


The Stumps of Flattop Hill is not just a spooky story; there’s humor and there’s also a character who shows strength. But the ending of the book is open to interpretation.Even though an entire town feared the haunted house, Florence maintained a peaceful and happy expression in the end. Maybe it wasn’t all that bad after all.


What has been your experience with the publication of The Stumps of Flattop Hill?


My process has always been about finishing a book and then pitching it to a publisher. When I finished The Stumps, it made its rounds to the publishers through my agent (it took a little over a year).  But once it was picked up by One Peace Books, it has been quite smooth and most of the art and text were kept as is. They were easy to work with and very supportive.

Here are a few videos of Ken creating illustrations. The first link is the trailer for The Stumps of Flattop Hill. I came across it on Twitter and immediately invited Ken to be a guest on my blog. Thanks, Ken, for sharing your talent here. If you're drawn to spooky books and fairytales, you're going to love this eerie tale! Click on the link below:

Click on the link below for a lesson in illustrating Edward Gorey style:

Click on the link below for a Pen and Ink drawing lesson:

Illustrations from inside The Stumps of Flattop Hill: 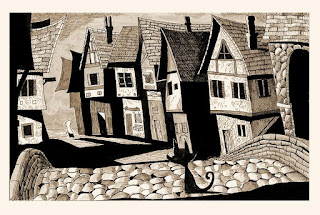 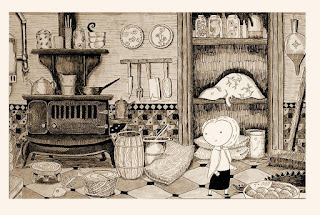 REVIEWS of The Stumps of Flattop Hill:

This is a book my kids would have dragged out of the box time after time, the one held together by sellotape and a shared love of things that go bump in the night. If there’s a small person in your life who likes delightfully creepy tales, give both of you a treat and buy them this. - Vulpes Libris
https://vulpeslibris.wordpress.com/2016/02/01/the-stumps-of-flattop-hill-by-kenneth-kit-lamug/

This book isn’t the type of children’s book such as The little Engine That Could or Green Eggs and Ham, all bright colors and a simple moral. It’s creepier and darker — both literally and figuratively — and ends more ambiguously than most children’s books. For the right kind of child — or an adult who remains young at heart — it may be just the right sort of book.
Las Vegas Review Journal (F. Andrew Taylor)

"Ken Lamug’s THE STUMPS OF FLATTOP HILL brings a long-overdue disturbance to the picture book arena. The cover alone promised me things that I was desperate for the story to keep.”
The Midnight Society
http://midnightsocietytales.com/2016/03/10/bookreview-thestumpsofflattophill/ 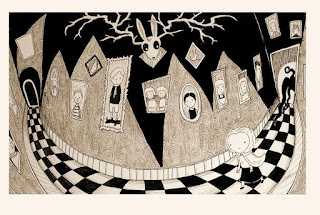 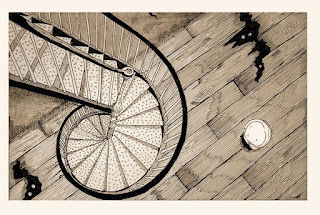 What are you working on now?
I’m always in the middle of a book project or doing research. I’ve just finished a 150 page wordless graphic novel. “Pedro and the Flea King” is about a boy who goes on an adventure as he tries to save the town from the king and his minions. It’s making its rounds looking for a publisher at this time. I’m also about to wrap-up an all-ages comic (titled Random Quest) which will debut in the fall for the Vegas Valley Comic Book Festival. With my down-time, I’m focusing on my children’s picture book projects, taking workshops and participating in critiques. Just trying to get better at the craft.
https://www.rabbleboy.com
https://www.facebook.com/rabbleboy
https://www.twitter.com/rabbleboy
http://www.thestumpsbook.com
Learn more about Ken Lamug and his books:

Posted by Clara Gillow Clark at 5:39 AM