Writing from the Inside Out. . . Author Bish Denham shares about Ghosts + Giveaway

A big thank you to everyone who stopped by to leave a comment last week. As always, I'm thankful to random.org for picking the winner. Congratulations to our winner, *KIM CHEZ!* Kim, please send your mailing address to: claragillowclark(at)gmail(dot)com. If I don't hear from you by a week from today, a new winner will be picked.

And now, please give the talented Bish Denham a warm welcome. Today you'll get a Ghostly look at a haunting tale from the past and a preview of Bish's own! Bish is generously donating a copy of her Middle Grade novel, The Bowl and the Stone: A Haunting Tale from the Virgin Islands, for this week's comment contest. Simply leave a comment for a chance to win! 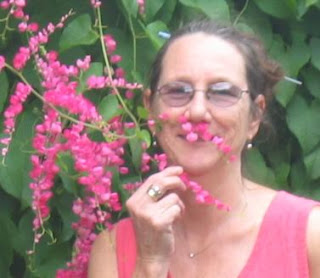 Bish Denham, whose mother’s side of the family has been in the Caribbean for over one hundred years, was raised in the U. S. Virgin Islands. She still has lots of family living there whom she visits regularly. She says, “Growing up in the islands was like living inside a history book. Columbus named the islands, Sir Francis Drake sailed through the area, and Alexander Hamilton was raised on St. Croix. The ruins of hundreds of sugar plantations, built with the sweat and blood of slave labor, litter the islands. Then there were the pirates who plied the waters. It is within this atmosphere of wonder and mystery, that I grew up. Life for me was magical, and through my writing I hope to pass on some of that magic.” The Bowl and the Stone: A Haunting Tale from the Virgin Islands, is her third book and second novel. You can find Anansi and Company: Retold Jamaican Tales and A Lizard’s Tail, at Amazon.com.

The History of Ghosts, an ancient Ghost Story, and an Excerpt from The Bowl and the Stone

Thanks for letting me *haunt* your blog, Clara! Today, I’d like to share a little something about the history of ghosts and an early ghost story.

The belief in ghosts can be found in cultures all over the world. Though, there’s no way to determine when the idea of ghosts first came into existence, wraith-like humans returning from the dead can be found in Mesopotamian stories, a culture that dates back to the 3rd millennia BC. Other ancient cultures that believed in ghosts were Egypt, Greece, Rome, India, and China. For the most part, the return of the departed was never a good thing, and was considered to be a sign that something had gone awry.

Perhaps one of the earliest accounts of an actual sighting of a ghost was related by Pliny the Younger, a Roman lawyer, magistrate, and author in a letter to a friend, written sometime between 50-100 AD. (As a side note, he and his uncle, Pliny the Elder, witnessed the eruption of Mt. Vesuvius in which the latter died.)

In the letter, Pliny describes a house in Athens that was rented by the stoic philosopher, Athenodorus. (There are three listed in Wikipedia so I don’t know which Athenodorus this one is, but all lived between the 3rd and 1st century BC.) The house had a reputation for making noises at night that sounded like rattling chains or fetters. A phantom had also been seen. Athenodorus was not put off by the stories and, on his first night in the house, set about writing in his room. It wasn’t long before he heard the clanging of chains, but he ignored the noise. Soon the noise grew louder until it seemed to come from outside the door and then right in his room. At this point he looked around and saw the phantom, an old man, “extremely meager and squalid, with a long beard and bristling hair; rattling the gyves (fetters) on his feet and hands.”

The ghost beckoned Athenodorus to follow him, which he did. The old man took him out into the garden, rattling his chains all the way and, at a certain point, vanished. The philosopher marked the spot and in the morning had the spot dug up. There they found a moldering skeleton intertwined with chains. At public expense, the bones were properly reburied and the house was haunted no more.

In my story, The Bowl and the Stone: A Haunting Tale from the Virgin Islands, Sam and her best friend, Nick are being haunted by ghost. In this excerpt, they encounter the specter for the first time.


Excerpt from THE BOWL AND THE STONE by Bish Denham

The air is different. There’s a strange moistness to it. It smells of damp earth after a light rain. And there’s another odor, faint, as though someone has walked past who hasn’t bathed in a while. A weight settles on my chest, making it hard to breathe.

“Do you get the feeling we’re being watched?” Nick asks.

I wrap my arms tightly around myself and hunch my shoulders. I want it to be a game, but it isn’t. This is real.

“Yes.” My throat starts to close, and the word comes out in a hoarse whisper.

We turn at the same moment, staring down the porch which is shrouded in the deepening gloom of dusk. A huge black man is there in the blocked doorway. His body fills the space. In the darkness I can barely make out the tattered pants that are tied at his waist with a rope. His face is in shadow. As one, without a word, Nick and I slowly walk towards him. As we approach, he backs up into the thorny tangle of lime trees and disappears. We race to the blocked entrance, but we can’t get through the trees, so how could a person of his size manage it?

“Did you see that?” Nick runs back to the main entrance and the front steps, red cape flapping.

I follow, almost stepping on his heels. “None of the branches were moving!”

We race outside and around the front of the house to the lime trees, searching for whoever disappeared into them, but no one’s there.

We go back to the front steps and sit.

“No, it’s not a game. Maybe it was a jumbie. OOoooooOOooooo.” 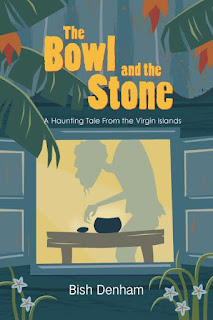 Pirates. Explorers. And spooky ghost hunters. It’s 1962. Sam and her best friend, Nick, have the whole island of St. John, in the U. S. Virgin Islands, as their playground. They’ve got 240 year-old sugar plantation ruins to explore, beaches to swim, and trails to hike.But when a man disappears like a vapor right in front of them, they must confront a scary new reality. They’re being haunted. By whom? And why? He’s even creeping into Nick’s dreams. They need help, but the one who might be able to give it is Trumps, a reclusive hunchback who doesn’t like people, especially kids. Are Sam and Nick brave enough to face him? And if they do, will he listen to them? As carefree summer games turn into eerie hauntings, Sam and Nick learn more about themselves and life than they could ever have imagined.
Purchase the book here:
Amazon: http://amzn.to/2cEYRIz
Smashwords: https://www.smashwords.com/books/view/650290


Thanks for sharing a bit of history about ancient ghosts, Bish, and for the eerie excerpt from your book, The Bowl and The Stone. I'm hooked!

Dear Readers, Please leave a comment for a chance to win a copy of Bish's haunting tale. The winner will be announced on MONDAY, October 24th.

The final HALLOWEEN post is an interview with author/illustrator Ken Lamug about his book, The Stumps of Flattop Hill. Yes, Ken is donating a copy of his haunting picture book! Stay tuned. . .


Posted by Clara Gillow Clark at 5:33 AM