The air is crisp, the leaves golden, the sky a deep October blue. Cider is mulling, pumpkins are morphing into Jack-O'lanterns, and some, so I hear, are dusting off their brooms for wild rides! But WAIT, what's this? Author Pamela Jane is sharing wisdom from her writing desk and giving you a chance to get a head start on your Christmas gifts (if you wish!) or Halloween treats in a special Comment Contest Book Giveaway! (Details at end of post!)

Pamela Jane is the author of more than thirty children’s books from board books to memoir.  Her recent children’s books include the much-loved Halloween book, Little Goblins Ten, a spinoff of the classic rhyme “Over in the Meadow.” The Christmas sequel is Little Elfie One. Both books are published by Harper and illustrated by NY Times best-selling illustrator, Jane Manning. Pamela is also the author of a new memoir, An Incredible Talent for Existing: A Writer’s Odyssey and Pride and Prejudice and Kitties: A Cat-Lover’s Romp Through Jane Austen’s Classic. In addition, Pamela is an essayist, writing coach, and columnist for womensmemoirs.com. Visit her here: http://www.memoircoaching.com


It’s Not About the Words!  By Pamela Jane


Years ago I took a weekend seminar with renowned screenwriting teacher, Bob McKee. The auditorium was packed. Not only screenwriters, but novelists, children’s authors, and editors of all genres had come to hear McKee talk about the art of writing and storytelling. I could hardly wait for the seminar to start.
McKee walked out on stage and stood for a moment, looking out at the audience. Everyone was silent, waiting for him to begin.
“Writing,” he said finally, his intense gaze scanning the audience, “is not about the words.”
Yes! I thought, someone finally said it! I had always felt that words were merely messengers of a deeper truth concealed behind or beneath them.
Writing, McKee went on to say, is about characters, meaning, and emotional impact.  (Although he was mainly talking about screenplays, the same is true of other genres, including memoirs.)
Recently I rediscovered the truth of McKee’s statement when I sat down to write Little Elfie One, a Christmas sequel to my rhyming Halloween book Little Goblins Ten, which had been published the year before.  I love writing in rhyme, and although the new manuscript wasn’t due for several months, I couldn’t wait to get started.
It was easy to slip into the holiday spirit on a raw November morning as I sat down with pen and paper by the glowing wood stove.  This was going to be so much fun!  But after several hours of scribbling random rhymes, I started to panic. The story was obviously not working.  The idea of a Christmas sequel (which was suggested by a fan of the Halloween book) was a huge mistake! Why had I thought I could pull it off?
My husband maintains that panic is part of my writing process. I always panic, he says, and then I figure out a way to make it work.  But if he’s right, I have to really truly panic. I can’t say, “Oh, great, I’m panicking – this is just part of my writing process!” Instead, I have to honestly believe that what I’m attempting is impossible. Which is exactly how I felt as I sat staring down at the jumble of disconnected rhymes.
This was not part of my writing process! I really could not do this. My editor had mistakenly placed trust in me, I realized with dismay. There would be no Christmas sequel, no story for the artist to illustrate, no holiday book signings.
Having a book contract in hand is a great feeling ­ – unless you can’t deliver. What was I going to do? The words were tripping me up, tying me (and themselves) in knots, obstructing and protesting at every turn. I could see them marching along carrying signs: “Sentences on Strike!” “Equal Pay for Adverbs,” “No Storyline, No Work.”
Storyline! That’s what was missing. In my eagerness to start writing, I’d forgotten all about the story. My Halloween book had a natural storyline in the building excitement of all the monsters getting ready to go trick-or-treating. But the Christmas story required an entirely different narrative.
At that point I crumpled up everything I’d written so far and threw the whole mess into the fire. Then I started working out a plot.
Bob McKee was right – writing is about characters, story, and meaning. For me, it’s also about panic, and tossing out dismal first drafts that serve as crude roadmaps indicating where not to go. (Literally thousands for my forthcoming memoir.) But the truth is, writing is also about the words, just not initially.Once I tossed out the aimless rhymes and got the story going, the words stopped pro-testing and hopped on for the ride.

LITTLE GOBLINS TEN by Pamela Jane/Illustrated by Jane Mannin HarperCollins Children's Books  978-0-06-176798-2, hardcover  Ages 3-7
From monsters to ghosties to goblins, everyone's favorite beasties haunt and howl and rattle their way through their forest home in this silly, spooky twist on the beloved nursery rhyme "Over in the Meadow." New York Times best-selling illustrator, Jane Manning, adds vibrant color and humor with her imaginative illustrations. 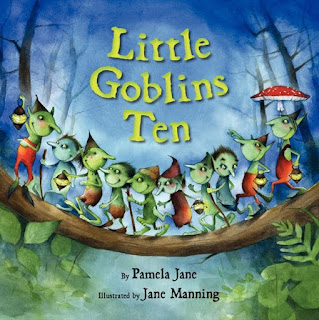 ★"Numerous titles interpreting "Over in the Meadow" have been published, but trust the team of Jane and Manning to conjure up an impressive new vision in time for Halloween...Even though this is essentially a counting rhyme, the author elevates the reading and listening experience with interactive rhyming text that is rich with alliteration and strong action words."Kirkus starred

LITTLE ELFIE ONE by Pamela Jane/Illustrated by Jane Manning HarperCollins Children's Books 978-0-06-220673-2 hardcover Ages 3-7 available as a NOOK Book
Way up in the North
Where the reindeer run
A Big mommy elf
Called her little elfie one.
"Santa comes tomorrow!"
"Hooray!" cried the one.
And he leaped and he laughed
Where the reindeer run.
From carolers to snowmen to stars, everyone's favorite Christmas characters sing, shiver, and shine their way through the North Pole in this festive holiday twist on the beloved nursery rhyme, "Over in the Meadow." Author Pamela Jane and New York Times bestselling illustrator Jane Manning have created a delightful new Christmas classic for readers young and old. 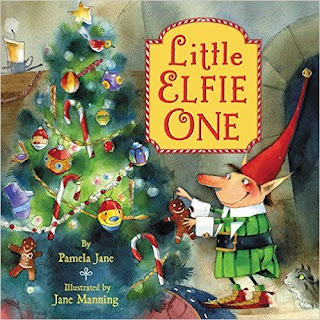 In recent years, many picture books have used the structure, rhythm, and cadence of the old counting rhyme beginning “Over in the meadow,” but few writers have come up with a version that works as well as this cheerful text, or one that ties up so well in the end. Capturing the upbeat tone of Jane’s verse, Manning’s lovely watercolor illustrations are brimming with warmth, spontaneity, and joy. A magical visit to Santa’s home base on Christmas Eve."—Booklist

Aren't these books tempting treats? I love the sense of whimsy and wonder shown in the illustrations that would make your little ones eyes light up! All you have to do for a chance to win is leave a comment for Pamela Jane. We'd love to hear your favorite Halloween or Christmas memory, but just telling us you'd like to win will make us happy!
Visit her here: http://www.memoircoaching.com
Thanks for sharing about your writing process, Pamela, and thanks for your generosity, too. I'll be back next week to announce the winner of the comment contest and to share a NEW author and giveaway for another 'spirited' book. ~Clara

Posted by Clara Gillow Clark at 5:07 AM