Writing from the Inside Out. . . Inspiration from Author Tracey Kyle + Picture Book Giveaway

How delighted I am to introduce my friend, Tracey Kyle! Tracey and I met last year at Highlights Foundation Summer Camp 2015 and we've stayed in touch ever since. Tracey shared her book, Gazpacho for Nacho, with me, and I fell in love with the warm colors and the zesty, rhyming text. As you can tell from her photo, Tracey has a warm heart and zesty personality. Her smile lights up everything around her! Thank you so much, Tracey, for being a guest on my blog, and thanks for being my friend.

Tracey has generously donated 2 copies of Gazpacho for Nacho for the comment contest! Please read to the bottom and leave a comment about Tracey's post for a chance to win.


Tracey Kyle grew up in New Jersey and spent much of her childhood reading and writing poems. She spends most of her time as "Señora Kyle," teaching Spanish to a lively group of 8th graders. Currently she lives in Virginia with her husband and two cats, and when she's not writing lesson plans or working on a new story, she loves to read, cook and practice yoga.
http://www.gazpachofornacho.com

Writing from the Inside Out. . .   Senora Tracey Kyle shares about her writing journey.

I was living in Madrid in 2004 with a group of Spanish teachers, studying art at the Prado and reading Spanish plays in cafés at the beautiful plazas around the city. It was hot. The sun in Spain is strong and while the heat is dry, it’s still 100 degree heat—or higher. And unlike Americans, the Spanish aren’t obsessed with air conditioning. Businesses prop open their puertas and everyone sits outside people-watching. I craved a cool breeze.

I had lived in Madrid as a college student many years earlier and had fond memories of my dear Spanish madre making a cold, tomato-based soup for me called gazpacho. Gazpacho varies in the different regions of Spain but the basic recipe is a mix of tomates and fresh vegetables. It’s delicious. It’s cool. It was the perfect sopa to eat that summer in Madrid.

At the local supermercado, they sell gazpacho in cartons like orange juice, so I bought a container and ate a cup for breakfast each day. At lunch, I ate another bowl, and at dinner yet again I ordered more gazpacho. “You should just take a bath in gazpacho,” a fellow teacher told me. By the end of the summer, I was back home blasting the aire acondicionado, frequenting our air-conditioned restaurants and driving my air-conditioned car.  But I still wanted gazpacho.

The idea for Gazpacho for Nacho didn’t come to me right away. I enjoyed writing, and had published a few books for Spanish teachers. I knew it was a long and frustrating process, but I had spent my childhood writing poemas and stories. While the idea of creating a children’s book was always there, it took a back-seat to my teaching responsibilities and my family. I realize now that I wasn’t ready.

These lines came to me in the middle of the night. I wrote them down in the notebook I’d been using to keep track of ideas as they occurred to me. That weekend I wrote the first of many drafts of Gazpacho for Nacho. It combined my love of Spain, the Spanish language and food. I spent the summer writing and rewriting. I joined the SCBWI, devoured books on “writing for children” and researched publishing companies. After six months, I submitted the story for publication to ten editors. By spring, I had received two rejections and hadn’t heard from the others. I told myself that I obviously wasn’t meant to be a writer and went back to planning lessons for my students, who at this point were the recipients of every creative idea I had. I was happy teaching, but the profesora in me was determined to teach kids about this yummy, cold sopa!

It was my husband who pushed me to dig out the story. A heavy snow fell that winter and we were out of school for a week. “You need to take out that manuscript,” he ordered, “and start writing again.” For eight hours a day, I worked on the story and researched editors who were interested in food, travel or multicultural picture books. Margery Cuyler at Marshall Cavendish was one of those editors. Her letter arrived that spring, saying that she thought it would make a “cute story.” Have you sold it yet? she asked. It took two years of revisions and the process was slow, but Gazpacho for Nacho was finally published with Amazon Children’s Publishing (who eventually bought Marshall Cavendish) in 2014.

For a very long time, when people asked me what I did for a living, I said I was a middle-school teacher. “And I write when I have time,” I would add, as if the hours spent thinking about my story didn’t count, or the months spent writing and revising didn’t take up too much of my time. As I started going to conferences and attending writing workshops, I realized that I was a writer long before I was published. 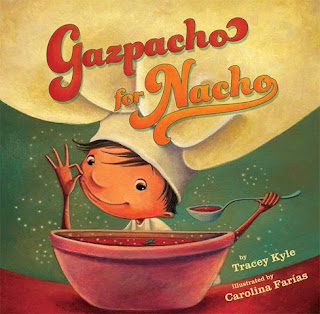 School Library Journal Review: K-Gr 3: This is the charming story of a picky eater who only wants one thing to eat - gazpacho. While most parents would be delighted if their children ate this Spanish vegetable-based soup, Nacho's mother desperately tries to offer him other dishes, including typical Spanish desserts, to no avail. In an attempt to get him to expand his culinary repertoire, his mother takes Nacho to the market; these illustrations will delight readers with large renditions of beautifully whimsical vegetables, such as vibrant green chiles and large plump tomates that will surely make an enticing and delicious soup. The text is integrated nicely on the spreads and easy to read. Though Latin inspired, this tale of a picky eater will resonate with many. It will make a fun read-aloud because of the rhyming text in addition to lending itself to interesting discussions about food, food avoidances, and trying new things. A recipe for gazpacho and a glossary of Spanish words with the language articles in parentheses are appended.—Maricela Leon-Barrera, San Francisco Public Library

Don't you agree that Gazpacho for Nacho is a feast for the senses? What a treat for youngsters of all ages! And all you have to do for a chance to win an autographed copy of Tracey's book, Gazpacho for Nacho, is leave a comment about her post. Want to increase your odds? Tweet the post for an additional chance to win. Join my blog. Share on FB. Easy, right? The winner will be announced a week from today on cinco de mayo!

Thanks, dear readers, from Tracey and me, for stopping by! As Nacho would say……Olé!

Posted by Clara Gillow Clark at 5:45 AM