In this post, my dear friend and author of many picture books for children, Patricia Thomas, talks about her inspiration for her newest book, Mouse's Christmas Cookie, and about her delight in the Christmas season.

Okay. I confess. I am a Christmas junkie. I love everything about it: the decorations, the lights, the music, the food, the shopping. I even love wrapping. It’s a chance for non-artist me to turn a box into a work of art. Best of all, though, I love the stories. From Dickens’ beloved Christmas Carol to that much newer classic, The Grinch That Stole Christmas, those wonderful stories help us focus on the true heart and meaning of the season.

One of my favorites, perhaps lesser known is Gift of the Magi. In this classic tale by O. Henry, two poor, young newlyweds, determined to give their loved one the perfect gift, each sacrifice a prized possession in the attempt to do so. That story of unselfish generosity was the inspiration for my own Christmas book, Mouse’s Christmas Cookie.

The book also, incidentally, uses many of my own favorite memories in telling the tale: Jingle bell ornaments, Santa and sleigh on the mantle, Christmas stockings, and of course, trains. But it’s the mischievous mouse and a very determined cat that eventually express the Magi’s spirit of giving. 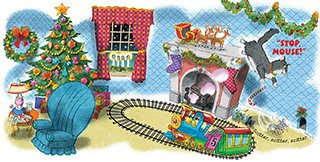 Thanks, Patricia, for sharing your heartwarming inspiration for Mouse's Christmas Cookie! It puts me in the joyful spirit of the season!

Now, something about the author in her own words:

I think I was destined to be a writer. I discovered the magic of rhyming words about as soon as I could talk; had my first poem published in Jack and Jill magazine when I was eight and knew immediately what my path would be.

I grew up on a farm in western Pennsylvania, earned my degree from Penn State University, then worked as a copywriter and editor in just about every facet of the advertising business. Along the way, I married and raised a family of four—which has expanded to include in-law children, fourteen grandchildren, and eleven (soon to be thirteen great-grandchildren, which gives away my age unmercifully). Also along the way, I discovered that I was a children’s book writer.

Maybe it was my love of words and rhyme...or maybe my wacky sense of humor...or maybe it was having children of my own...or maybe it was all of this that led me to write my first book, "Stand Back, Said the Elephant, “I’m Going to Sneeze.” Thousands of copies (I have no idea how many) and more than 40 years later, kids are still giggling over the Elephant.

Rhyme is not my only medium, though. My books, stories, and articles cover a spectrum of styles, from the lyrical Firefly Mountain (named best book K-3, 2008 by the Poetry Center at Passaic College) …to Nature's Paintbox: A Seasonal Gallery in Art and Verse, an original poetic approach to nonfiction (a Booklinks lasting connection in poetry) …to such zany, nonsense verse classics as “There Are Rocks in My Socks,” Said the Ox to the Fox, The One-and-Only, Super-Duper, Golly-Whopper, Jim Dandy, Really Handy Clock Tock Stopper, and of course, the Elephant, which has been featured on the PBS Storytime series and even on Captain Kangaroo. In fact, the Elephant has gone multi-lingual. It is now published in a Korean edition, and most recently, I worked with a talented German composer to turn the Elephant into an operetta for children’s theater—produced in both German and English

A recent picture book, Red Sled, is written in a unique, deceptively simple style, based on an ancient writing form—but, as it turns out, is perfect for young readers. Among its numerous enthusiastic reviews are those from School Library Journal, Booklinks, and Horn Book, plus a starred review from Kirkus. My articles and stories have appeared in such magazines as Faces and Appleseeds, covering subjects from Arthurian legends to the Loch Ness monster to Benjamin Franklin.

My newest picture book is Mouse’s Christmas Cookie, a story for young readers, told mainly in onomatopoeia sounds—except for a single line of dialogue: “Stop, Mouse!” called out by a determined cat who pursues an equally determine mouse through the book. But the chase is not about what a reader might think.

I teach a college-accredited course in writing for children for the Institute of Children’s Literature, and present writing workshops for children and adults, while also serving as senior writer/editor in the Communications and Marketing Department at Marywood University.

Great News: Author Patricia Thomas is giving away an autographed copy of Mouse’s Christmas Cookie to one lucky reader who leaves a comment! The winner will be announced on Friday, December 11th! What do you love about the Holiday Season? We'd love to know!

Check out Mouse's Christmas Cookie on amazon by clicking on the link below: 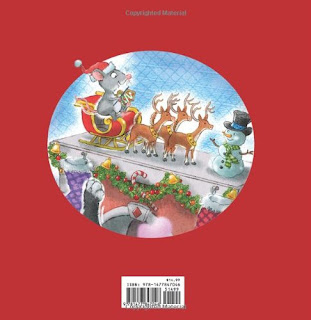 Patricia Thomas will make a guest appearance again in March for the release of a new book, GREEN BEAN! GREEN BEAN! Sounds intriguing, doesn't it?


Posted by Clara Gillow Clark at 4:08 AM