Dear Reader,  Thanks for joining Julie Chibarro and me for the promised interview that shares insight into Julie's writing process and research! Be sure to read to the end for details about the drawing for deadly

In the short interview that follows, Julie shares about her first YA novel of historical fiction, Redemption, set in early Colonial America. (Read a review of Redemption below!) Purchase your choice of format by clicking on this very long link: http://www.amazon.com/s/ref=nb_sb_ss_i_0_14?url=search-alias%3Dstripbooks&field-keywords=julie+chibbaro&sprefix=julie+chibbaro

1.  What drew you to this time period--1524 England and the New World?
Before I started writing Redemption, I felt like I knew big dates in American history from school – 1492,1776 – but I didn’t really know history, I mean, where it began, with Europeans being curious about the New World and what was here in the years after Columbus came, but before the colonies were settled in the early 1600s.  In 1524, there were still a lot of Native tribes, and a lot of exploration (and, subsequently, the genesis of white Indians, whose existence started my path to writing Redemption).
2. What were some of the challenges you encountered when researching and/or writing about the 16th century?
There were very few people writing at that time.  There were some French trapper notes, and Jacques Cartier’s journals, and ship’s logs, but mostly I had to depend on historians looking back.  Historians often disagree with each other about this largely undocumented period in the Americas.  I had to decide things for myself.
3. How did you find your emotional connection and entry point into the story of 12 year old Lily?
I didn’t know I was writing a YA novel when I started Redemption.  I simply wanted to write from an innocent’s point of view, someone not too spoiled by the prejudice of her time.
4. Can you offer any research tips or insights into your writing process?
Depending on the period, I think it’s always good to get as pure as you can when doing research.  I mean, read original texts, come to your own conclusions about what happened.  Writing history is sort of like learning a foreign language:  immersion is always best.
About my writing process, I have periods of “in” and “out.”  I go “in” myself to write, and come “out” to promote my work.  Each period can last days or weeks, but I find it hard to do both simultaneously.
5. What was your favorite book as a child?
I’d have to say I return often to Anna Karenina.  I read it first in 7th or 8th grade, and fell in love with it, and have read it every few years since.  Talk about a world completely different from mine!  Yet I feel so passionately for Anna.  How did Tolstoy do that?  I’m still trying to figure it out. Review of Redemption from TeensRead.com (Five stars!):
In 1524 England, twelve-year-old Lily hasn't felt warm since the baron's men dragged her father away eight months ago. She pictures him dead. However, Frere Lanther, who has come from the Rhineland to lead his own secret and forbidden church, suggests Lily's father may well be alive in the New World. The baron is forcing Lily and her mother to leave their home, which he owns. When Lily begs her mother to accompany her to the New World to find her father, her mother reluctantly agrees.
The voyage is miserably cramped and filthy. A live pig lives in the room where the poor passengers eat their meals of watery soup and insect-ridden black bread. Lily meets the baron's son, Ethan, onboard and inadvertently blurts that Frere Lanther lives with them. When Lily's mother is raped, Lily is heartsick. She knows her mother's punishment was a direct result of Lily's exposing her family's secret.
A shipwreck upon the shores of the New World ends the voyage. The castaways stumble upon a gruesome discovery, which increases Lily's fear that her father is dead. When her mother is kidnapped, Lily must set off alone through the forest, starving and terrified. What she finds in the forest is astonishing.
Multi-layered REDEMPTION is truly unique. Lily's story is a harrowing physical and spiritual quest laden with mystery, filled with unexpected plot twists. The tale is harsh, violent and gruesome --- not for anyone wanting to view history through a rosy haze. Yet the book is also vibrant, riveting and beautifully written. Lily herself is a believable, sympathetic character surviving devastation after devastation.
If you love history, you'll enjoy this powerful piece of historical fiction. If you snoozed through history class (as I did), you'll love REDEMPTION for a fascinating read that may even turn you --- yes, YOU! --- into a history buff. 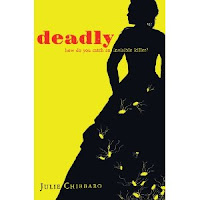 Julie is giving away copies of deadly until March 4th. Visit her web-site to learn the details: juliechibbaro.com

Leave a comment here about the interview for a chance to win a copy of deadly. The lucky winner will be announced on Friday, March 4th!

Thanks so much for joining us today!
Posted by Clara Gillow Clark at 5:01 AM

Email ThisBlogThis!Share to TwitterShare to FacebookShare to Pinterest
Labels: Redemption by Julie Chibbaro