PART 2 of "Discovering America's Past through Historical Fiction"

In Part Two of our historical fiction series, Author Elizabeth Winthrop shares insight into her research and in the story behind the character of Grace from her book, Counting on Grace, that we learned about in Part One.  Leave a new comment at the end of the post for a chance to win an autographed copy of the book! Winner to be announced on Valentine's Day. Thank you, Dear Reader, for joining us!

Because of a Lewis Hine photograph, Addie Card became the poster child of child labor. But what became of Addie Card? 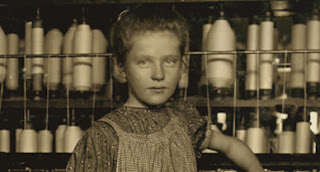 She leans casually on her spinning frame, staring out at the camera, dressed in a filthy work smock. Her bare feet, planted firmly, are slick with black grease. Her left arm rests easily on the huge machinery but crooked at a strange angle, as if perhaps a bone had been broken and never set properly. To keep her hair from the frame's hungry grasp, it is pulled tight and pinned in a style befitting a grown woman. A few wispy strays float around her head like a halo. The elements of her face seem perfectly proportioned: the delicate nose, the small ears tucked back, the curve of her lips, the puff of her cheeks. She is a painter's dream. Or a photographer's.
I first saw her four years ago in a show devoted to Lewis Hine's pictures of child workers in Vermont. Hine had been hired by the National Child Labor Committee to bolster its written reports with documentary photographs. Records show that he was a traveling man. From 1908 to 1918, he crisscrossed the country by train and automobile, taking pictures that brought home the hard realities of child labor. Because of Hine, comfortable middle-class Americans were forced to look at children embroidering lace in airless tenements on New York's Lower East Side, selling newspapers on crowded streets in St. Louis, cutting sardines in Eastport, Maine. He talked his way into mines in Pennsylvania and West Virginia, where the bounce of his magnesium flash off the whites of a breaker boy's eyes illuminated a blackened, airless landscape. To back up his photographs, Hine scribbled details in a notebook hidden in his pocket. About this sad-eyed Vermont girl he wrote: "Anaemic little spinner in North Pownal [Vt.] Cotton Mill."
Hine took several photographs that August day in 1910, but the image of the girl somebody named Addie Laird is the one that endured. Who was she? Lewis Hine once said that he was "more interested in persons than in people." The same is true of a novelist. Even though I didn't know what had happened to that child, I decided to imagine a life for her. After I finished my novel about her, I began to search for Addie herself.
I had little hope; the U.S. Postal Service had been unable to locate her in 1998, when officials there put Addie's picture on a 32-cent stamp. But it turns out they didn't look hard enough.
I found her in the 1910 Census when I thought to put "Adelaide" and any logical variant into a database search form. On sheet 12B in Bennington County, Vermont, on May 4, 1910, a Census worker recorded a Mrs. Adalaid Harris, listed as head of household living with six orphaned or abandoned grandchildren, including the Card sisters: Anna, female, white, 14 years of age, single; and Addie, female, white, 12 years of age, single.
So Addie's name was not Laird, but Card. That clue led me and fellow researcher Joe Manning down a trail that twisted through town offices, dusty historical societies, funeral homes and Social Security death records.
Hine's little spinner lived the dark side of the American dream, according to records and relatives. Her mother died of peritonitis when Addie was 2. She was put to work in the mill at the age of 8. (She had to stand on a soapbox to reach the bobbins.) She renamed herself Pat and married twice, neither time happily. Months after losing custody of her biological daughter in 1925, she adopted another girl, the newborn illegitimate child of a Portuguese sailor. Mother and daughter moved often from the dreary mill towns of upstate New York to the big city itself, where Addie and friends were captured in a studio photo celebrating victory in Europe.
Recently, Manning and I met with two of Addie's adoptive descendants. We learned that by the time she died, at 94, she was living in low-income housing and surviving on a Social Security check. "She didn't have anything to give, but she gave it," Piperlea Provost, her great-granddaughter, told us. "I could not imagine my life without Grandma Pat's guidance."
Addie never knew that her face ended up in a Reebok advertisement or on a postage stamp issued 100 years after her birth, or that Hine's glass plate negative resides in the Library of Congress. Addie Card LaVigne never knew that she had become a symbol.
Like so many of the subjects of his photographs, Lewis Hine also died in poverty. In the 1930s, the work began to dry up, and he was perceived as rigid and difficult; efforts of friends such as fellow photographer Berenice Abbott to resuscitate his career failed. He died at age 66 on November 3, 1940, a widower whose rent was covered by a friend.
And like Addie, Hine seemed to recede into the mists of history. But his child labor images secured his reputation as a documentarian and as an artist. We return to the photograph of Addie again and again because Hine saw her not just as a symbol but as a "person" with a life beyond the mill. For that reason, the "anaemic little spinner" remains as firmly burned into our national memory as she was etched into the glass of Hine's negative almost a century ago.
Elizabeth Winthrop is the author of Counting on Grace, a novel based on the Lewis Hine photograph of Addie Card.   http://www.smithsonianmag.com/history-archaeology/indelible-sep06.html#ixzz1BIIs6MMr

Email ThisBlogThis!Share to TwitterShare to FacebookShare to Pinterest
Labels: Counting On Grace